Format of the DATA MATRIX

The encoded data size depends on the type and the length od the data to data to code.

An intermediate structure of 8 bits is used to save each data: the codeword.

A symbol is composed of 3 groups of codewords:

Graphic representation of the DATA MATRIX

A symbol is composed of black and white rectangular patterns called "cells" or "modules".

A module represent a bit: usually black for the "1" and white for the "0".

The DATA MATRIX can be a square (mostly used) or rectangular.

The symbole can be decomposed into 3 parts: 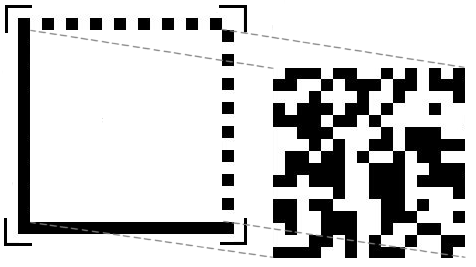 When the symbol exceeds a certain size limit, the symbol is divided into data areas, regions, which are defined by internal locating designs. Four types of division into regions exist: 3 for square and 1 rectangular shape.

Six encoding modes coexist: ASCII, Text, C40, X12, EDIFACT and Base 256. The ASCII encoding is the default encoding and the most used. It will be presented here only.

The set of values ​​of the ASCII mode codewords are visible in the following table:

Some of the values will not be explained because not used in the ASCII explanation.

In the ASCII mode, some data are encoded according to three possibilities:

When the number of data codewords can completely fill the "data" part of the symbol smaller possible codewords filler are added. The first of these codewords, which indicates the end of data in this case is always "129". Following is calculated using the following algorithm 253-state:


The Reed-Solomon codes are used as error correction system. They have a capacity of detection and correction of errors defined in advance, depending on the size of the data matrix.

A body C is a set of elements provided with two closed and called binary operations addition and multiplication. Being closed means that the result of each operation on two elements of the assembly will always be an element of the assembly.

There are many bodies, finite and infinite. It turns out that for any integer prime p and any integer n (>=1), there exists a unique finite np elements, noted GF(np). These bodies are called Galois fields.

Elements can also be represented in different forms: binary, decimal, or even in the form of a polynomial. For the same example as:

The addition and subtraction of two elements is the XOR (exclusive OR) between these two elements. Multiplication and division are calculated by multiplying the corresponding polynomials. This operation is relatively expensive in computation time, an algorithm is used. Since all components are a power of primitive polynomial p, must be sought for each element c, i power as:

From there, we can calculate for two elements c and d:

We can get the e antilogs table thanks to this algorithm:

A Reed-Solomon code of length n with k data is noted RS(n,k). So there is n-k = 2t check symbols and this code can correct up to t erroneous symbols. The number of control symbols is defined by the size of the Data Matrix.

The equation for encoding a RS(n,k) code is:

The 2t check symbols are derived from a polynomial power generator 2t, 2t + 1 compound words, which is of the following form:

There are 16 block lengths of Reed-Solomon possible (see summary table). The coefficients of the generator polynomials can be calculated using the following algorithm:

with n the number of blocks for the symbol

An example of interleaving can be viewed as follows:

It is however possible that a codeword can not be contained entirely within the matrix at a certain location. These can then be separated into parts (2 or 3) to be continued on the other side of the symbol. 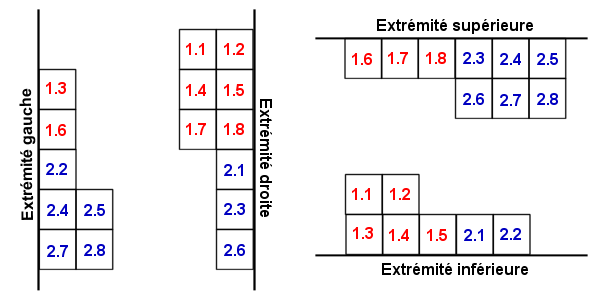 In addition, in four cases, the codewords placed in the corners can also be placed differently. 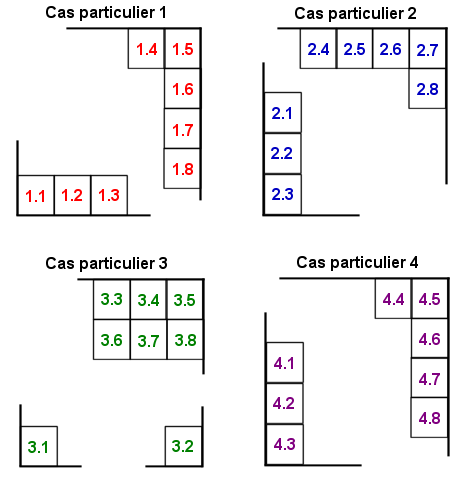 Placement in the matrix follows a certain order. The initial codewords are always placed as follows: 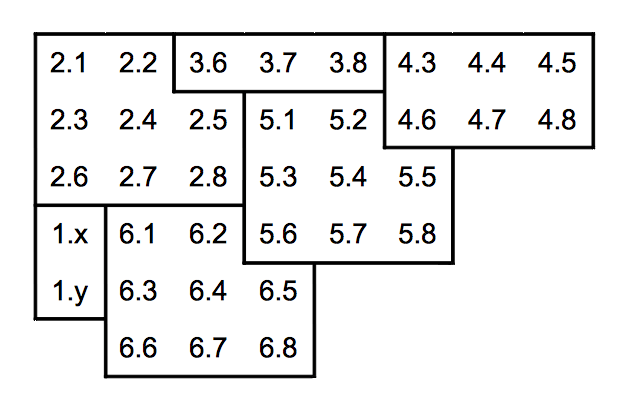 The codewords are then nested in the other, following the oblique lines (45 °) in parallel. The meaning is identical slashes half the time. 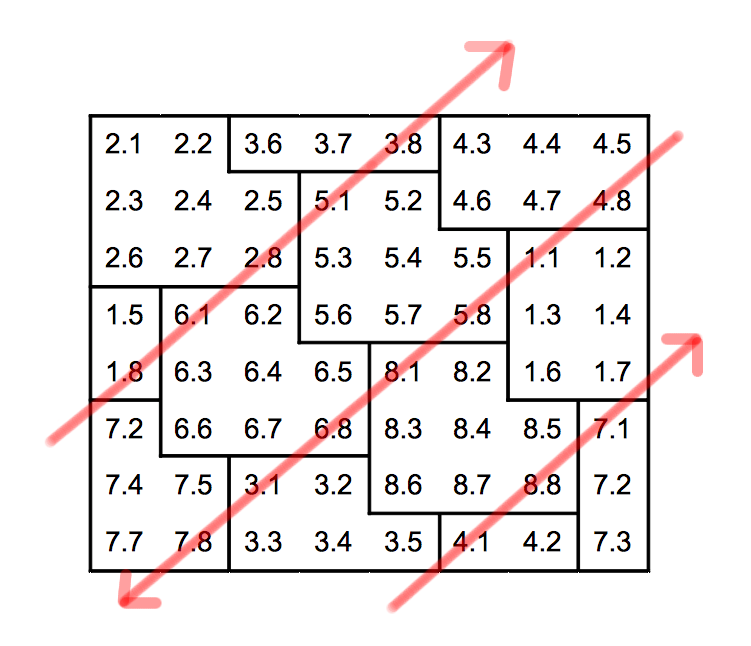 It may, depending on the size of the symbol, the four modules of the lower right corner are empty. Symbols 12x12 example, the data matrix is 10x10, which give 100 modules in 12 codewords can be inserted. Knowing that a codeword full 8 modules, a total of 96 modules will be occupied and the last 4 remain empty. To fill, use of alternating black and white modules as shown below:

Suppose we want to encode "ENC01." ASCII values ​​of the characters are:

Depending on how ASCII, the values ​​of codewords will be:

The value of codewords 1, 2 and 3 were calculated simply by using the "ASCII value + 1", while the codeword 4 encodes two digits using "130 + numeric value."

It has four codewords to encode, therefore we choose the minimum size of the symbol to encode: it is the symbol of size 12x12, offering a data matrix of size 10x10 and 12 codewords to encode compounds 5 codewords and data correction codewords 7. Knowing that 5 codewords data are needed and that we do not have that 4, a codeword filling will be added: it is the codeword value "129", which is always the first to indicate the end of data. It is not necessary to calculate other using the 253-state algorithm.

Compared to what we saw earlier, we know that:

As a reminder, the operations occur in GF(28). With the algorithms presented above, the generator polynomial was calculated:

The calculation of the codewords representing polynomial correction is performed like this:

The correction codewords, corresponding to the coefficients of the polynomial are:

Must then place these codewords in the data matrix according to the appropriate algorithm. The order of placement is as follows: 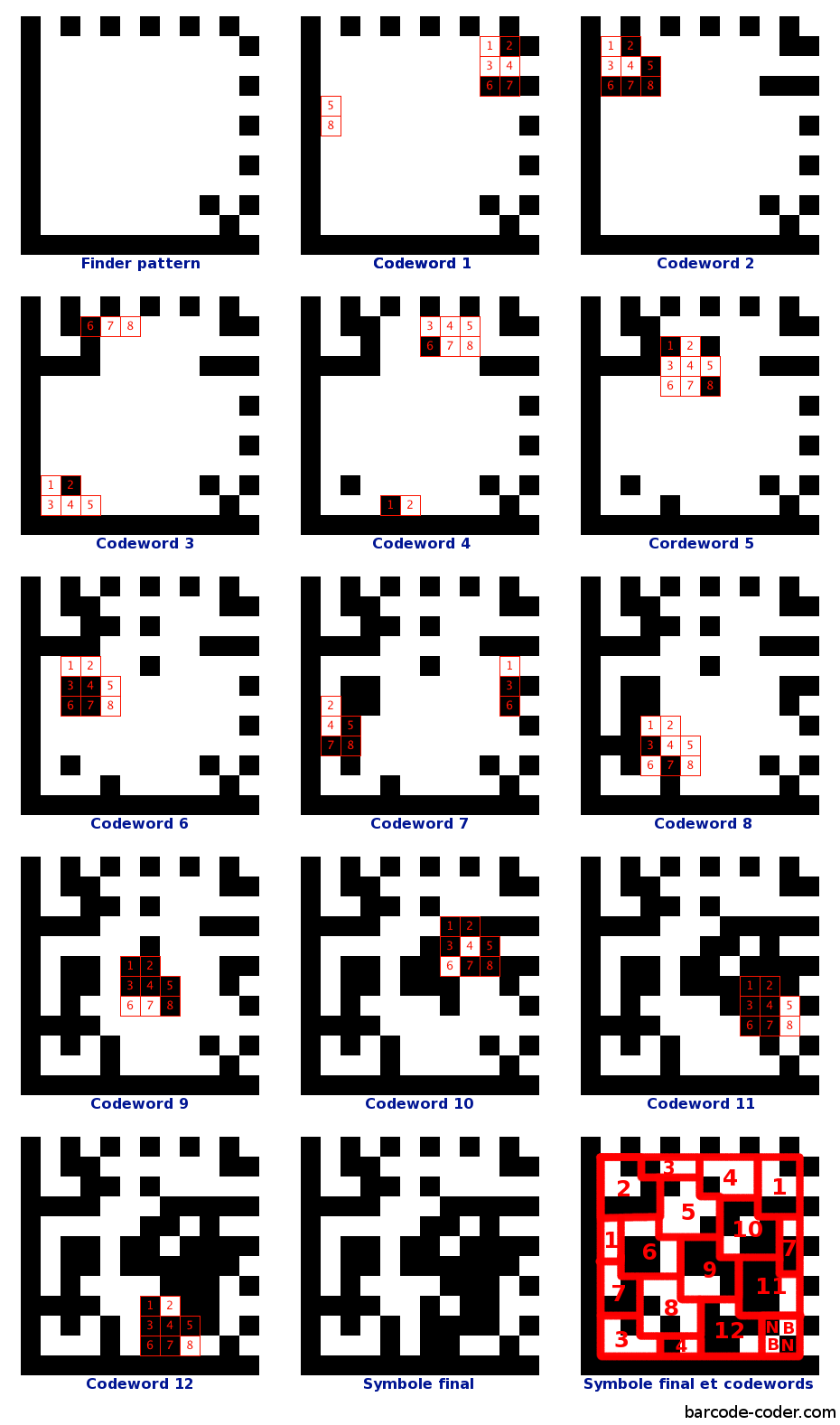 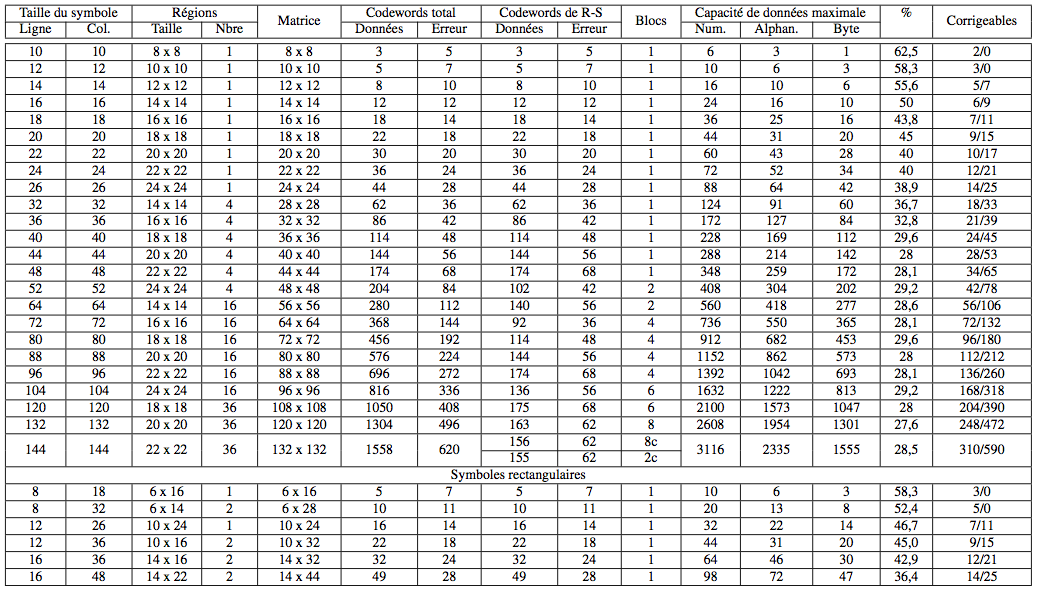